Progress is being made!

And I am developing some muscle!  It is all slow going as my asthma is acting up due to some medication I am taking for the hip injury.....sort of a catch 22 situation! 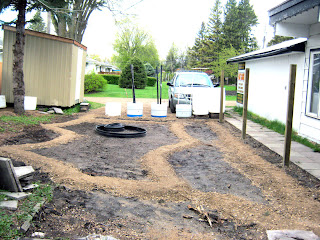 We laid out the paths with some of the extra gravel, and put in the fence posts for the espaliered trees.  The rain barrels and self watering planters will keep people from ever trying to park or walk in the garden! 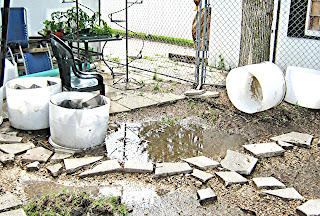 This picture is four days after a torrential rain.  Picture this with water so deep it covered the path paving stones in several places!!  Dirt delivery was delayed while I dug a channel through the parking pad to drain it.

We spent the long weekend cobbling together more self watering planters.  We will have line of four of them along the chain link fence with pole beans to hide it.

We planted a green and a purple grape at the join in the two panels but the grape vines will take a few years to grow up and make the fence attractive.  I am going to do a triple cordon with the main stems twisted around each other and green and purple cordons alternating on both sides. (Being an artist sure makes gardening complicated!) 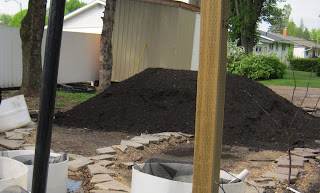 The dirt was delivered with only four inch deep ruts left in the edge of the parking area and the foot of the garden.  It was a BIIIG truck!  Ten yards of dirt looks like this.  Had to dump it in the middle as there was a phone wire in the way. 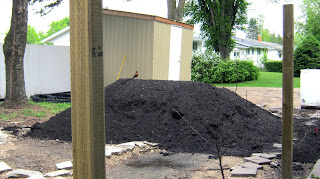 The local Robin thinks it should be a wealth of worms.  I hope it will be too, but for now it is pretty wormless.  It has dirt, sand, peat moss and manure.  Num.  I just want to run my fingers through it!  DH says yuk! 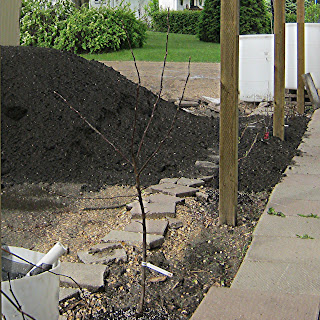 The trees were planted before the dirt arrived.  We dug half holes, put in the trees and then built up to the graft line with potting soil.  We filled in around after the soil arrived.  First is a Nor-Kent Apple, second is a Manor Plum, then a Crimson Passion Cherry and finally three Honey Berry bushes which are not self fertile.  We had to replant the last one as it washed out in the deluge.  Thirty feet of espaliered orchard  only two feet wide and paths both sides for harvesting.....I am an optimist...... 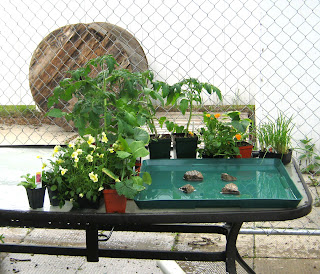 Bless our little birds.  We fashioned a temporary birdbath which they refused to even notice until we put a little forest around it.  I wonder what they will do when we plant the forest in the garden.
We worked hard all weekend.  I was supposed to go to a fabric dying day on the Monday with my stitching group, but my DH gave me a sad-eyed puppy dog look and said that if I would stay home with him he would be my slave-for-a-day in the garden.  He won't admit it but he enjoys gardening as much as I do, but he is not too enamoured with the initial set up of a brand new space, it is a powerful lot of work!

We are a pair of cane-toting old folk, and do a lot of sitting enjoying each other's and the bird's company between spurts of strenuous work!!

DH has been bringing home perennials that we had farmed out last fall when we were told we had to move.  Quite a few did not make the winter, but we have a lot of lilies, iris, a painted daisy, a false sunflower, and something that we have no idea what it is.  We may have transplanted a magnificent weed!

I will be picking up a beautiful rhubarb from our old garden tomorrow.  It was given to me by a good friend and has sentimental value.  I think I will pick up some of the horse radish as well. (I left some roots and had great fun imagining the horse radish erupting up through the floor behind the new teller cages!  I'm baaad!)  (Construction has been delayed on the new Credit Union, they are haggling with the Town over parking....or so the rumour goes....). 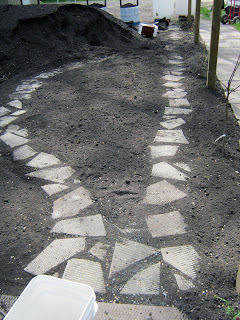 The beds are filling.  I want them to be a good foot higher in the centre but will wait to see how much dirt is left.  The harvesting path looks a bit like a drunk laid it!  Blame that on my meds!  Kind of quirky though.

The trees are all nicely nestled in, and there is some green coming after only six days...WOW!  That's Boughen Nurseries in Valley River, MB.  Last year was their 100'th Anniversary.  Everything is guaranteed to leaf out and their service is great. (The owner's wife and I used to show horses together many many moons ago.)

I gotta go as I have been sorely neglecting my office work......not as much fun as gardening!
Posted by Dianne Leatherdale Johnson at 4:59 PM 3 comments:

Whooeeee, time flies when you are not having fun too!

Spring is the busy time for General Meetings of the two art groups I belong to.  As I am on the board of both, I am very involved.  One group is setting up their annual show and I am the Applications Co-ordinator and have been spending hours and hours with that.

I injured my hip again with the move in December, and am still, five months later, in severe pain and it has slowed me down to a crawl, not that I am very fast to begin with.  It is hard to be inspired and work on art when you are exhausted from dealing with constant pain.  DH has been a life saver with the help he gives me around the house, but he can't create art for me.

We are both avid gardeners, and we are looking forward to turning this yard which is presently all parking lot and weeds: 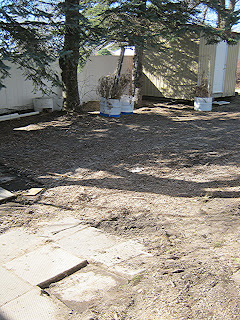 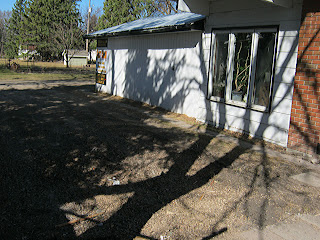 into a respectable flower garden with fruit trees.

We have doubled the width of the sidewalk on the right, put in posts for espaliered trees (apple, plum, cherry and two honey berries) tilled it all and discovered that the back twelve feet of yard that we are not leaving for parking is 8 inches deep in gravel!!

We had the gravel dug out, saved some in our garden planters to use as paths, and we had enough left over to fill all  the pot holes in the back lane!  A good three and a half yards of the stuff.

We then had the top scraped off the dirt at the front and pushed it into the hole left by the gravel removal.  I am now plotting out the paths and building them up with gravel upon which we will put the broken pieces of patio tiles in an interesting pattern.  Then we will have twelve yards of good topsoil mixed with manure spread over everything, then dig down to find the paths, thus making raised beds.

Sounds easy, doesn't it?  NOT!  I am good for filling and placing three half filled pails of gravel then I sit for a while and watch the birds!  The paths are inching their way along slowly.  My Dr. has told me I can take a lot more Tylenol 3 than I normally do, and with that easing the pain when I work, I really think that the exercise and weight lifting is actually helping to heal my hips.  That and my weekly massages.

(You don't have five deep therapeutic massages in twelve days!  Ask me how I know!  That is a whole 'nother story!!  I thought I would get a jump start on it since our Income Tax refund arrived and I can now afford it.  Another NOT!  I am down to once a week and trying to be patient.)

In the studio I am working on a "hat".  I have volunteered to do several hats for an exhibit of a hat collection.  Various artists are taking the life time collection of hats to turn them into something wondrous.  My 'Buttoned Down Winter Wedding' is almost done, base is ready to have the Outrageous added!

I am also decorating some shoes.  The smallest and most impossibly high heeled shoes I can find at the self-help will be turned into more Outrageousness!  I am hoping to sell these at a gallery as table ornaments.  I also have some commitments for art quilts, and need a lot of new pieces for the show at the end of October.  I think I will have to chain myself to my sewing machine!

I will also try to blog a lot more often. 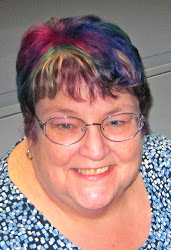